Bowerbirds are fascinating birds to study as they exhibit an array of unusual behaviours, but they are perhaps most famous for their bower building skills.  Every spring, matur

e males build bowers and it is a common misconception that these are nests.  Bowers are used purely to attract females and the male plays no part in nest building or parental care. See a video of a male courting a potential mate here. 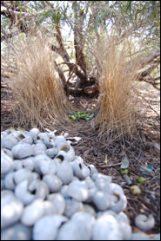 Many bowerbirds also incorporate the songs and calls of other birds into their own vocalisations.  Spotted bowerbirds can mimic at least sixteen different bird sounds as well as the sound of pigeon wings flapping and human speech.  It’s not entirely clear why most bowerbirds mimic, although satin bowerbirds may use it to attract a mate as females prefer males that copy lots of different sounds with good accuracy.

My research with John Endler has also revealed that great bowerbird males have another trick up their sleeves.  Males build and maintain display courts at both ends of their bower that consist of stones, shell and bones spread out on the ground.  The size of these objects increases as distance from the bower increases  so that a positive size-distance

gradient is created.  This gradient produces a visual illusion known as forced perspective for the female within the avenue, and this can affect how she perceives the male’s display in a number of a ways.  The gradient may create a uniform background so that decorations that the male waves over the court during display are more conspicuous.  The perspective effects may also make displayed objects appear larger, and further visual illusions may also be created when the male moves the display objects or the female moves her head.  Males that create high quality gradients mate with more females than males that have lower quality gradients, and this provides evidence that not only can non-human animals create visual illusions, but also that they can be used to promote mating success.