We are interested in understanding how animals perceive and interact the world around them. Our research uses birds, insects and humans to ask questions about how sensory processes affect the perception of signals, signal form, and use of signals/cues by others. Current research in the group investigates how animals can exploit sensory systems by creating visual illusions in mate choice and predator-prey interactions, the effects of urbanisation on herring gulls, and the effects of proportional processing on signal perception.

Urbanisation and behaviour in herring gulls

This project seeks to understand the causes and consequences of urban life in a generalist seabird. Herring gulls (Larus argentatus) are widespread in coastal and estuarine areas across the UK, but their overall population is on a steep downward trajectory. Despite this, these birds are an increasingly common sight in urban areas, including here in Cornwall where our experiments are conducted. Gulls often breed and forage in coastal towns, raising important questions about how their behaviour and ecology may differ from that of gulls in more traditional environments.

Herring gulls are widely disliked by the public, particularly because of their feeding behaviour. These gulls scavenge discarded litter and sometimes even take food from people’s hands. We seek to understand the nature of herring gulls’ interactions with humans and the urban environment. We ask questions about whether gulls use cues from humans when making foraging decisions, how gulls perceive novelty, and whether juvenile gulls learn to eat the same foods as their parents. We hope that a better understanding of herring gull behaviour can inform policies regarding conservation and management.

Motion dazzle describes high contrast markings (e.g. black and white stripes) that do not provide concealment to a prey animal, but may help it to avoid capture by affecting perception of its motion. In collaboration with FoAM Kernow and Anna Hughes, we have created ‘Dazzle Bug’, an online game where the challenge is to capture moving patterned bugs. The bug patterns will evolve over time to become harder to catch, allowing us to understand how patterns can provide movement camouflage. Play at www.dazzle-bug.co.uk! We have adapted this game for use in class practicals and for outreach purposes, please get in touch if you are interested in using Dazzle Bug.

Dr Eleanor Caves is examining the behavioural and ecological implications of continuous variation in a visual signal, the tail (sword) length of male swordtail fish Xiphophorus helleri, being treated as a non-continuous signal by the receiver.

Animals, including humans, generally compare stimuli based on proportional rather than absolute differences in stimulus magnitude. This is known as proportional processing, and it adheres to Weber’s Law. Weber’s Law describes the ability of a sensory system to distinguish between the magnitude of two stimuli based on their proportional difference. Proportional processing has important implications for animal behavior, because it impacts of understanding of discrimination thresholds. Additionally, many animals use signals to choose mates or assess rivals that involve assessing the magnitude of two stimuli (for example the length, width, or area of a signaling trait). The often implicit assumption is that recievers continuously perceive continuous variation in signaling trait. However, this assumption is rarely tested and is the focus of Eleanor’s fellowship. 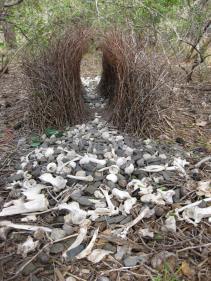 Male bowerbirds build structures called bowers that are used purely to attract a mate. The specific design of the bower is unique to each species, but in every species females will visit a handful of bowers and then select a mate based on the attractiveness of his bower. Male great bowerbirds (Ptilonorhynchus nuchalis) build avenue-type bowers with large piles of grey stones and white bones at either end called courts as seen in the photos on the right and  below. These objects increase in size as distance from the bower avenue increases.  This creates the visual illusion of forced perspective when a female views the male display court from inside the bower.

Forced perspective occurs when unconscious assumptions about the sizes and distances of objects are violated. For example, in architecture a building can be made to look taller if the windows get smaller with each consecutive storey. Our brains assume that the windows in the building are all the same size and therefore when standing on the ground looking up at the building we get the impression that the building is taller than it really is.  Bowerbirds do the reverse: the objects on their courts increase in size as they get further away.

Males that create high quality illusions mate with more females than males that have lower quality illusion, and this provides evidence that not only can non-human animals create visual illusions, but also that they can be used to promote mating success. Watch a video here! Interestingly, each male constructs his visual illusion to his own specifications so there is a lot of variation in illusion quality. These differences among males are also consistent over time, but males seem to improve slightly year on year when constructing their illusions. 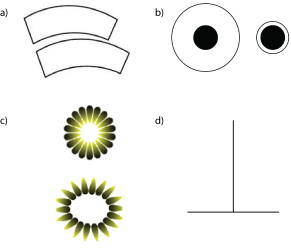 Visual illusions occur when there is a large mismatch between what is being seen and what is actually present. There is mounting evidence that many other animals also experience visual illusions, and some of my current work investigates how illusions may be incorporated into animal signals to manipulate the viewer. Illusions may affect the perception of length, size and colour, for example in a) the top edge of the bottom shape seems longer than the top edge of the top shape (they are the same length; b) the black circle on the right hand side looks larger than the one on the left (they are the same size); c) the centre of the upper shape looks brighter than the lower one (they are the same brightness); and d) the vertical line looks longer than the horizontal one (surprise surprise, they are the same length!) Although these are artificially created illusions, animals may create their own versions of these types of illusions to fool predators, prey, or potential mates.

Many bowerbirds are also proficient in copying sounds produced by other species, known as vocal mimicry. Spotted bowerbirds (Ptilonorhynchus maculatus) mimic up to 16 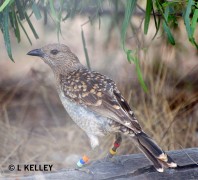